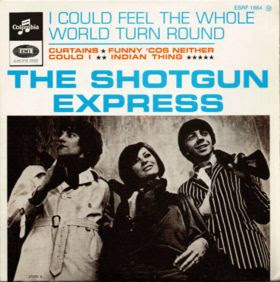 "As music drifted from the late night show. The boy and girl without a place to go. Sat together just to pass the time. They found a love as good as you will find anywhere ..." Soho Square may be closely associated with Kirsty MacColl, but The Tremeloes' Negotiations In Soho Square touched on the subject of benches and romance many years before. It's a fantastic song, and yet another great example of a '60s group tapping into what's hip and happening. It was a smart move to use the songwriting pair of Tony Colton and Ray Smith. They're one of those teams that the more you delve the more you realise their significance. They wrote some fantastic mod blasts, made some of their own using the Tony Colton name, penned some for others like I Stand Accused (which Elvis Costello covered), Zoot Money's Big Time Operator and Star Of The Show, The Shotgun Express' I Could Feel The Whole World Turn Round, Sharon Tandy's Border Town, Cream's The Coffee Song, and Georgie Fame's Red No. 9. At the end of the '60s they had their own group Poet and the One Man Band which also featured Albert Lee and a couple of Fotheringay guys. They made an incredibly beautiful but sadly lost LP. They'd later work again with Albert Lee (and indeed Chas Hodges) in the great country rock outfit Heads, Hands And Feet. Among their side-projects would be writing Belfast Boy for Don Farnon and working with Richard Harris on the soundtrack of A Man Called Horse. They also worked quite a bit with the great arranger Johnny Harris, notably on Shirley Bassey's Something LP where she was given a fantastic hip makeover. This was an assignment Johnny had won after the release of his wonderful LP Movements where he came up with some exceptionally cool orchestral workouts ...