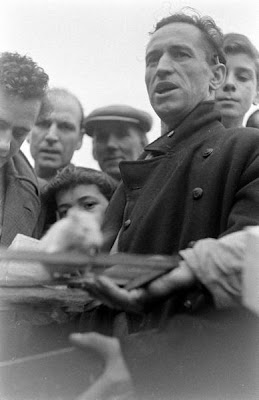 "And now for your delight the darling of Wapping Wharf Launderette ... Ronald 'Leafy' Lane!" Our comrade William recently sent a link for a piece of film he'd recorded of Ian McLagan speaking about his old soulmate Ronnie Lane. In it he refers specifically to two London songs Ronnie had written. One was the Small Faces' Itchycoo Park, which is one of those numbers so familiar you almost forget how good it is. Ian explains that the Park his old bandmates would have known as kids was not some ornate lovingly landscaped green space, as featured in the promo film (was that Chiswick House?). Instead it (Little Ilford Park or wherever) would have been a bit of a wreck, an overgrown bombsite, covered in nettles and rosehips (hence the itchycoo part), but it would have been their playground, where they got their education. The other song was Debris, from The Faces' era. It's such a beautiful song, and it becomes more poignant when you realise it's about Ronnie's father. I believe the market in the song is Club Row, the poor relation of Petticoat and Brick Lanes, once known for its animal trade. Ronnie's father, apparently, would go down there every Sunday morning to rummage through the junk on sale. Naturally the young Ronnie couldn't wait to break away, but later there is a sense of loss, an unexpected feeling that, yeah, that old routine is something you kind of miss ...