Rockin' At The Two I's 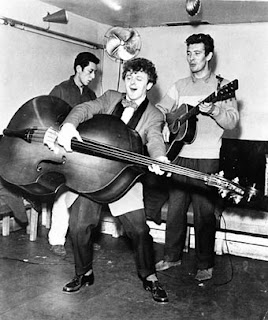 "Now I rushed out the gate, went walking down the road, I got up to the bus stop, put on my overcoat. Along came a bus, a number 54. When I got inside they were rockin' on the floor ..." sings Wee Willie Harris in his tribute to the birthplace of British rock 'n' roll, Rockin' At The Two I's. This infamous coffee bar in Old Compton Street was sanctuary for anyone who was anyone in the early history of UK skiffle and rock 'n' roll. If you look at old pictures of the time you can practically smell the coffee and hair oil, and sense the svengalis, songwriters and would-be stars hanging out there dreaming their dreams. Bermondsey boy Wee Willie Harris is perhaps best known now as one of Ian Dury's Reasons To Be Cheerful, but he was one of the graduates of the Two I's academy. His debut single was his tribute to the coffee bar, and I particularly like it for the reference to coming home to have his tea because that's what people did. Another south east London graduate of the scene was Terry Dene, and his debut single White Sport Coat is a particular favourite of my mum. The flipside, Man In The Phone Booth, is a bit of a London song with its reference to the telephone number Stepney 51586. With a hint of mystery and vulnerability you can see why our mums went for Terry ...