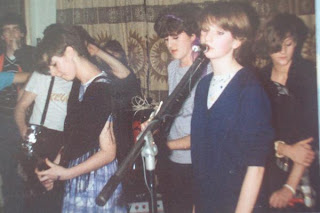 "'Cos there ain't no love in Oxford Street ..." sing the Television Personalities on Oxford Street, W1 on the flip of their debut 45, which of course contains one of the greatest guitar solos in the history of pop. The TVPs were right. Who would want to go to Oxford Street now? But ... "When I was 17, London meant Oxford Street ..." sings Tracey Thorn on Everything But The Girl's Oxford Street. And I know what she means. At that time (the start of the '80s) the street had three branches of Virgin, and there was no need to head out west to Rough Trade or up to Camden. You could get all the independent and odd pop releases you needed in the Megastore, downstairs at The Pantheon, or up at Marble Arch where memorably I saw John Lydon and Feargal Sharkey in the shop at the same time (not together) and to a 15 kid that was a dream come true. I can remember buying the Marine Girls' Beach Party LP on Oxford Street (Tracey Thorn's first group's release on the TVPs' Dan Treacy's Whaam! label) and I guess I would have been 17 then. I certainly bought her A Distant Shore cassette on Oxford Street the following summer. And probably Ben Watt's Summer Into Winter 12". Possibly the first Everything But The Girl single too ...