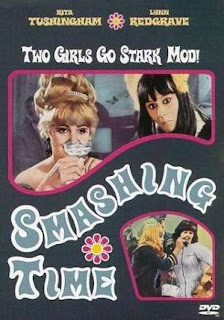 "The street's that a part of the beat that's the heart of the scene. You know my Auntie Rene would find it quite obscene ..." Rita Tushingham and Lynn Redgrave star as Brenda and Yvonne in the George Melly-scripted film Smashing Time where two girls from the North are drawn to the delights of swingin' London but quickly find it's a hollow sham. Rita and Lynn were so great at the 'ugly duckling' roles. And oddly I've always been more drawn to the awkward anti-swingin' London films like Smashing Time, The Knack and Georgy Girl (with the wonderful Jim Dale-composed theme song) rather than the likes of Blow Up or Performance. I don't think that bears too close an analysis. There is a kind of irony in George Melly sending up the swingin' '60s scene as his book Revolt Into Style on the Pop Arts in Britain helped fuel my own obsession with the mod thing. Ah gone are the days when you could pick up a copy of that, Generation X (the Charles Hamblett and Jane Deverson one), Folk Devils and Moral Panics by Stanley Cohen, and all the Nik Cohn books, for next to nothing in any charity shop.