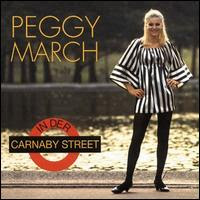 "I walk around in Piccadilly. Looking at the shops in Regent Street. There's lots of things to see in London. And when you're feeling low there's always Soho ... " sings the great Sandie Shaw on her lost 1968 b-side London where she rather wonderfully sounds as if some clothing is about to be removed. Oddly the song is easier to find now in the Spanish or German versions. I loved the way the proper pop singers would record their songs in other languages. Sandie in Italian works a treat for me. This recording of pop songs in other languages sometimes resulted in singers being more successful away from their native shores. Nancy Holloway and Peggy March are great examples. Peggy, for example, from the mid-'60s onwards was far more popular in Germany than back home in the US. And one of her German hits was In Der Carnaby Street which as well as demonstrating the international currency of pop culture features some rather splendid whistling too ...