Up At The House Of Cecil Sharpe 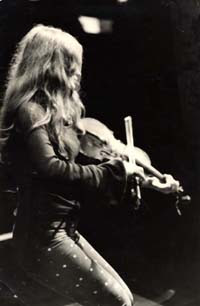 "And now I'm working in Soho. The glasses clink and the lights are low. Those dear old days are dead and gone. I dance with nothing but a python on ..." sings Carole Pegg during the version of Sydney Carter's Up At The House of Cecil Sharpe she recorded with her husband Bob in the early '70s as part of an LP And Now It Is So Early. This was a great collection of Sydney Carter songs, which featured the great man himself on a handful of tracks. Bob and Carole had a little earlier recorded Sydney's Lord Of The Dance on their He Came From The Mountains LP. That record features a fantastic and haunting cover of Phil Ochs' The Scorpion Departs. The Peggs are perhaps best known for their works as Mr Fox which are right up there with the best of the British folk rock recordings. I would argue that Carole's voice was the best of that whole electric folk era. And her solo LP Carolanne is very much worth seeking out. This song of Sydney Carter's though is a witty piece about someone who was very much part of the folk scene up at Cecil Sharpe House, the home of the English Folk Dance and Song Society (EFDSS), but times change, people fall out of favour, and needs must so they're now earning their money by doing a bit of exotic dancing in Soho. You can see what we meant about that mischievous twinkle in Sydney's eye. The LP itself can be bought direct from Carole, who is now a highly respected ethnomusicologist, at her website.
Posted by Yr Heartout at Saturday, April 24, 2010