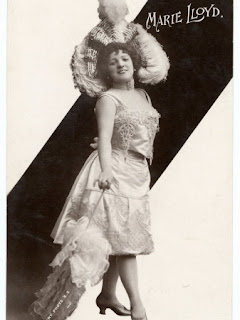 "No doubt you've heard about the Turkey Trot. Some say it's rot. Some say it's not. Well, I've got another one that speaks a lot. And it doesn't come from Yankee land. If you see a Johnny in the latest style ..." sings Marie Lloyd at the start of her number about The Piccadilly Trot. So, long before Londoners were doing The Lambeth Walk, they were parading around Piccadilly according to this delightful number by the Queen of the Music Halls and possibly a great aunt a few times removed. The song itself, from that period just before WW1, refers to the ragtime style which was very much in vogue (even Erik Satie had a ragtime inspired piece called Le Piccadilly). The little digs at America was a bit of a feature of music hall numbers, and the magnificent Marie was certainly fiercely loyal. Loyal to her profession by backing the 1907 Music Hall strike. And loyal to her own London in her performances, in songs such as A Coster Girl In Paris where she suggests: "And if they'd only shift the 'Ackney Road and plant it over there, I'd like to live in Paris all the time ..."